What Are the 7 Chakras

What Are the 7 Chakras 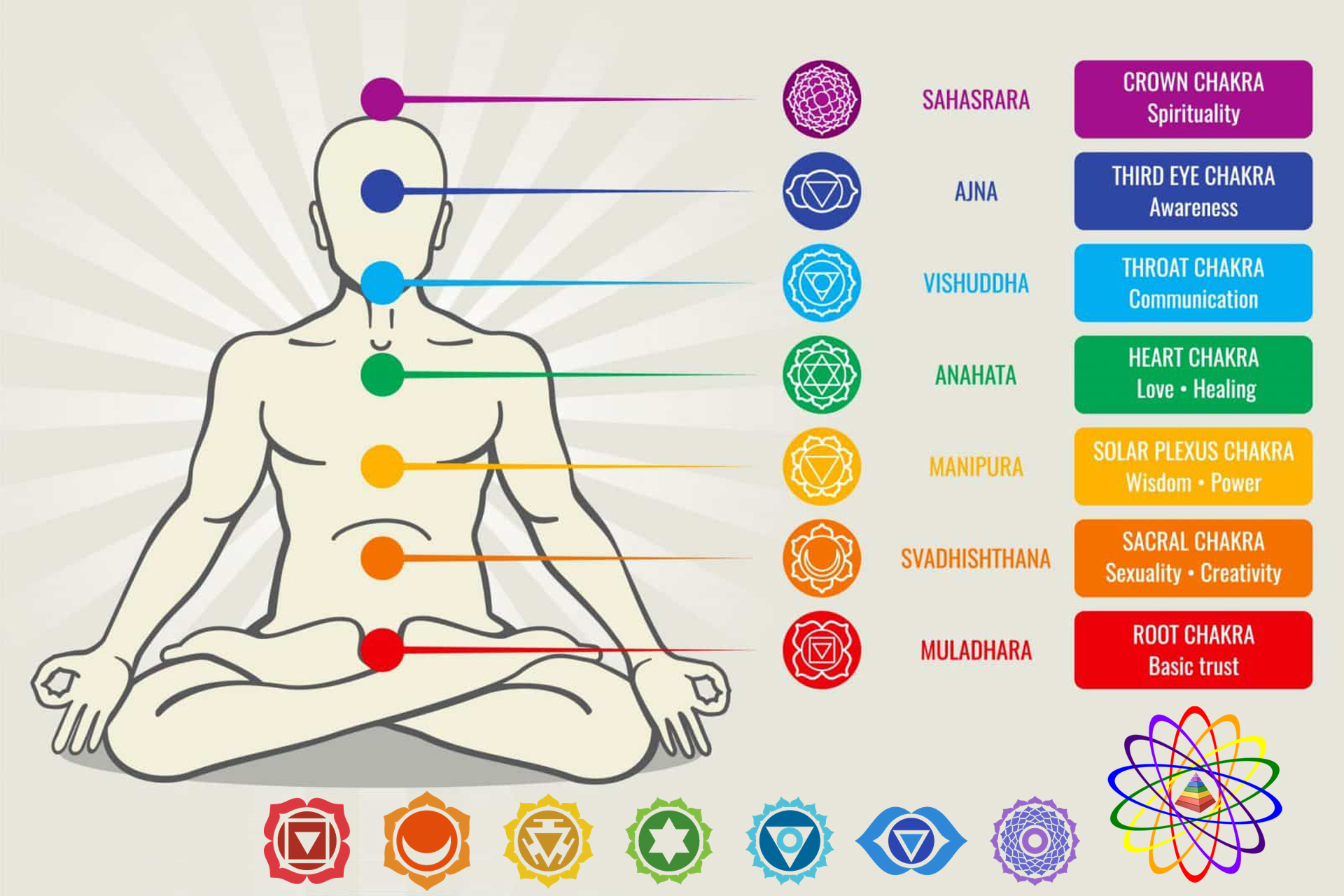 Simply put, chakras are an area of the body that is dense with energy. Chakras are part of an ancient system that dates back to 1,500 – 500 B.C., written about in the Vedic texts of India, and passed down through oral tradition prior to that. They’re also mentioned in yogic teachings, which is likely why you’ve already “opened your heart chakra” in yoga class.

What exactly is a chakra:

There are seven main chakras, from the top of the head to the root of the spine, nestled right through our center. “Chakra” is the Sanskrit word for “wheel,” and refers to vortexes of energy that reside in and correspond to areas that have vital organs, such as the heart, brain, and reproductive organs. These vortexes are not static the way bones are, but continuously rotate as energy moves through us in upward and downward currents. Think of a figure-8 that repeats itself – with the chakras being the connection points.

It is said that when your chakras are healthy and vital, they are “open,” but when energy stagnates, one or more chakras can become blocked, or closed, leading to various physical and emotional symptoms. Each chakra has a color, which corresponds to its energy and purpose.

Because each chakra represents an area of energy, it’s common for one or more chakras to become “blocked,” which means that we can’t totally live in alignment with our mind, body, and soul. Here’s how to determine if a chakra is blocked, and how to open each chakra up for better flow of energy.

The seven chakras, from root to crown The root chakra is located at the lowest part of your torso, the perineum or the base of the spine. Your root chakra is associated with birth, survival, safety, and stability. It is all the things necessary for the rest of life to unfold, including food and water, shelter, and a sense of belonging. It is our connection to nature, to our family, our origins. When speaking about your root chakra, the corresponding verbs are “I have” and “I am.”

Color: The root chakra is associated with the color red, as it’s tied to our circulatory system which carries blood and oxygen. Red is also a very primal color, and the root chakra represents our survival.

Signs of Blockage: Because the root chakra is involved in our fight-or-flight response (stress response), feelings of stress and experiencing chronic stress can cause the root chakra to become blocked. This blockage may manifest as fear, anxiety, uncertainty, disconnection, and bone/joint pain.

To re-balance and open the root chakra, it’s important to prioritize self-care in all forms. Foods that can be healing for the root chakra include red foods, such as beets, and foods from the ground for more grounding energy, such as potatoes and carrots. Hot peppers and protein from meat can also help open up the root chakra. Color: The sacral chakra is associated with the color orange, an energizing and creative color. As the sacral chakra is connected to our creativity, emotions, and sensuality, orange emanates feelings of warmth, safety, and pleasure.

Signs of Blockage: When the sacral chakra is blocked, you may experience boredom, lack of inspiration, stiffness, impotence, or uterine/bladder/kidney issues. One may also experience emotional distress and an inability or lack of desire to engage in pleasure or sexual activities. To re-balance and open the sacral chakra, it’s important to prioritize pleasure and creative pursuits, as well as to practice accepting change and what you cannot control. Foods that can be healing for the sacral chakra include orange foods such as tangerines and oranges, as well as nuts and making sure you’re hydrated. Located in the upper abdomen, just below the rib cage, the solar plexus chakra is our source of power and confidence. It is associated with our inner fire, will, energy, self-esteem, and essence of transformation. If you feel that you are lacking power, tap your solar plexus chakra to activate it and gain internal strength by using the corresponding verbs “I can” and “I do.”

Color: The solar plexus chakra is associated with the color yellow. Yellow represents feelings of courage and friendliness and can help you feel stimulated. Once our basic survival needs are met, and we have movement and autonomy, we can be fully open to love. The heart chakra is located at the body’s heart center and extends throughout the arms and hands. The heart chakra is associated with affinity, unity, healing, balance, relationships, and compassion. When speaking about your heart chakra, the corresponding verb is “I love.”

Color: The heart chakra is associated with the color green, which may seem strange, as we tend to correlate the heart with red or pink. Green represents a general feeling of well-being and health and emanates feelings of alertness and empathy.

Signs of Blockage: When the heart chakra is blocked, you may experience disgust, withdrawal, judgment, heart disease, asthma, and immune system deficiencies. A blockage can also manifest in an inability to be compassionate and feelings of jealousy, anger, and distrust – all feelings you may experience if an important relationship falls apart.

To re-balance and open the heart chakra, it’s important to prioritize being loving and compassionate towards yourself and others. Foods that can be healing for the heart chakra include green foods, such as leafy greens, herbs, and green tea. Located in the throat, this chakra is associated with expression and communication, not only between the self and others, but also between one’s own mind and body. The throat chakra connects our ability to speak and listen, to sing, express our thoughts creatively, and let our true selves show. When the throat chakra is healthy, we literally resonate with the things that bring us joy. When speaking about your throat chakra, the corresponding verb is “I speak.”

Color: The throat chakra is associated with the color blue, an intellectual color. Blue represents logic, communication, and trustworthiness, all of which are represented by this particular chakra.

Signs of Blockage: When the throat chakra is blocked, you may experience an inability to communicate, neglect of self-care, thyroid problems, colds, as well as creative blocks whether in your professional or personal life. If you’ve ever felt like you were scared or unable to open up to someone, you know exactly what this feels like.

To re-balance and open the throat chakra, it’s important to prioritize speaking your truth and using your energy effectively. Standing up for yourself and others is a big part of keeping your throat chakra open and clear. Foods that can be healing for the throat chakra include all types of fruits, juices and teas. Color: The third eye chakra is associated with the color indigo – an in-between of the colors blue and purple. Indigo is a spiritual color, and prompts feelings of peace, self-awareness, and intuition.

Signs of Blockage: When the third eye chakra is blocked, you may experience confusion, headaches, and eyestrain, in addition to mental rigidity or stubbornness. As the third eye chakra is involved in your intuition and ability to tap into logic and reasoning, a blockage can hamper your decision-making especially as it relates to your dreams and goals.

To re-balance and open the third eye chakra, it’s important to “avoid illusion,” or return to what you know. Foods that can be healing for the third eye chakra include purple-colored fruits such as blueberries, grapes, and plums, as well as chocolate and lavender-flavored teas or spices. Just as the root chakra is our connection to the earth, the crown chakra connects us to the cosmos and universe. Located at the top of the head, the crown chakra is associated with wisdom, consciousness, transcendence, and meditation. The crown chakra can bring us bliss and allow us to understand the true nature of reality. When speaking about your crown chakra, the corresponding verbs are “I know” and “I understand.”

Color: The crown chakra is associated with the color violet, a vibrant purple. The color violet represents interconnectedness, and emanates feelings of oneness, evolution, and of being spiritually awake.

Signs of Blockage: When the crown chakra is blocked, you may feel apathy, a disconnect from spirituality, or potentially psychological problems hindering your ability to learn or communicate. To re-balance the crown chakra, it’s important to prioritize breathing clean, fresh air, and getting out into the sunshine to reconnect with our surroundings and “higher being.”

There are no foods that are associated with healing the crown chakra, as this chakra encompasses the health of all the others, and an open crown chakra means that you have open and balanced energy pathways throughout your entire body.

Do the 7 chakras balance each other: